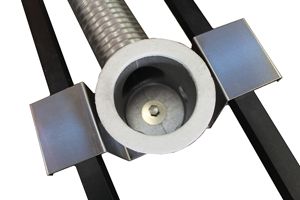 Have a Rolling Stand? Have an EnviroVent2? You may want to purchase the new EV2 Rolling Stand Adapter. The new adapter is a bracket that is designed to fit in between the cross supports of your Skutt Rolling Kiln Stand. The EnviroVent2 collection cup is spring loaded so it can move up and down with the bottom of the kiln as the brick expands and contracts. With the new bracket, the foot of the collection cup is spring loaded against the bracket instead of the floor. This way, when you roll your kiln, the cup goes with it. Now obviously you can’t roll it very far because it it is attached with ducting to the motor, but it does allow you to move it for cleaning without having to reposition the cup.