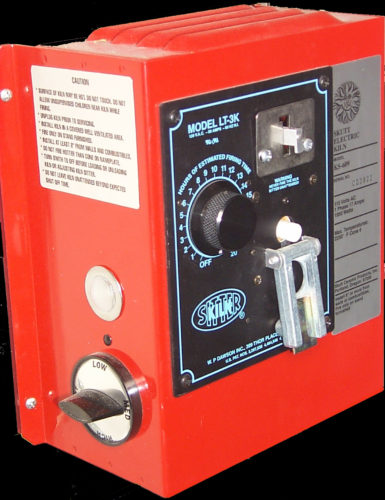 The very KilnSitter Kiln Skutt produced rolled off the line in 1954. The KilnSitter itself has not changed much over the years but the kilns we mounted them on went through a few variations. The first group of kilns we call “The Old Style” were made from 1954 to 1980. These kilns had KilnSitters without the Dawson branding and had shallower control boxes. When we moved to using a Dawson branded KilnSitter we changed the name styling of the models and begin putting an “A” in front of the serial number. We call these kilns the “A Series” and they were made between 1980 and 1996. The most significant change was the elimination of Interbox plugs and Receptacles. These allowed the sections to plug into each other instead of being connected by wires passing through the boxes. This change was made in 1996 due to the manufacturer of the parts discontinuing them. These Models use the new name styling but have a “KS” added to the front of the model name. We call these the “New Style” kilns.